What is ‘native speaker’ competence and why is it important for a translator?

On the homepage of our t’works website we proudly promote the fact that our language services incorporate ‘native speaker in-house specialists [who] translate into more than 50 languages’. Other Language Services Providers (LSPs) include similar information on their sites and the term ‘native speaker’ is often employed. Of course, we stand by this statement and fervently believe that having ‘native’ language ability is essential for a skilled translator, reviser, content creator or other role involving the production of high quality, professional texts for an international market. But what exactly do we mean when we use the term ‘native speaker’? What qualifies someone to be described like this? Is it always necessary for translation? What are the benefits?

Many questions that perhaps you might assume, are easy to answer for those working in the language industry. Not always I reply! Here in the t’works marketing department we recently found it quite difficult to pin down exactly how to explain what ‘native speaker’ fluency is and how to communicate it with clarity. Even for those ‘in the know,’ defining what being ‘native’ means isn’t straightforward. So, with the aim of coming up with a clearer definition for both ourselves, our customers and anyone else who kindly reads our blog, we decided to investigate.

The Cambridge Dictionary defines a ‘native speaker’ as ‘someone who has spoken a particular language since they were a baby, rather than having learned it as a child or adult.’ Merriam Webster’s offering is ‘a person who learned to speak the language of the place where he or she was born as a child rather than learning it as a second language.’

But what about if you grow up in a multilingual household and learned to speak another language from birth as well? At what age does one pass from ‘baby’ to ‘child’ and is there a cut-off point in age when we can no longer qualify as a ‘native speaker’? What if you learn a language at an early age but then move to a country where that language isn’t spoken and for whatever reason you don’t use it anymore?

The myriad of questions would seem to suggest that a single, clear definition is hard to come by. Even the term ‘native speaker’ is itself unsatisfactory and has its critics is academia. Some argue that the ‘concept is historically situated in nationalist discourses and colonial regimes of languages, nations and peoples’ and others that in language research ‘it is unhelpful to rigorous theory construction and harmful to marginalized populations’. In other words, it can be interpreted as exclusionary and as acting a barrier to opportunity for ‘second’ language speakers. In their code of professional conduct, The Institute of Translating and Interpreting gives the alternative expressions ‘mother tongue’ and ‘language of habitual use’, and The Chartered Institute of Linguists, ‘native language/language of habitual use’. Both these bodies add clauses qualifying these terms by adding that the translator should only work into a language for which they have expert competence and command in all its forms. The American Translators Association prefers ‘native language’ and ‘native speaker’.

This tells us that even within specialist circles defining the concept is a little tricky. It also suggests that we perhaps need to develop another term to replace the somewhat loaded word ‘native’ or the

longwinded ‘language of habitual use.’ Could we talk about having a ‘natural language’ or an ‘instinctive language’? Something to think about…

So, how do language speakers themselves feel about their abilities? When do they feel ‘native’ or not?

Working in translation services automatically means working across numerous languages, and the international nature of the t’works group means being multilingual is the norm, even if you’re not directly involved with translating. The writer of this post is slightly ashamed to admit to only working in 2 languages, English and French, but one of our colleagues in marketing speaks 6 (yes 6!) and the head of our team 4. When I recently asked the latter how they assessed their own language abilities, the fascinating response was this:

‘…my only real mother tongue is Russian. It is the language I can speak and write perfectly, intuitively feel all the nuances immediately and also write and speak in all possible styles (from elevated to slang). In Ukrainian I am actually perfect and have no accent, but I have no real feel for the language. And my German is fluent and flawless, but I have a slight accent and no real feel for the nuances of the language either…’

Of course, they speak English very well or we wouldn’t be able to work together, but this response tells us that the only language they really ‘feel’ deeply on all levels is Russian, despite fluency in the other two, and interestingly suggests that only in Russian would they be completely happy to write creatively in or translate into.

So, what makes a ‘native’ speaker?

The concept of ‘feeling’ a language is at the heart of explaining what being a ‘native’ speaker means. It’s so much more than speaking it from a young age and continuing to speak it into adulthood, although these are undoubtedly necessary. Being ‘native’ means having this language in your very bones, in your head and feeling its intricacies and subtleties completely. You live and breathe this language and your understanding of it goes far beyond the rules of grammar and spelling.

This profound knowledge of a language is the also the gateway to the culture and customs of the people who speak it, their humor, idioms, cultural points of reference and quintessential nature. Translators know how all these function in their target language and can pinpoint equivalents in the translation that will resonate the same way as in the source text.

Which brings us to why having a ‘native speaker’ translator is so important in a professional context. A translation never exists in a vacuum, it always has a purpose and that purpose goes much further than words on a page. The translation will need to inform, to explain, to sell, to promote, to persuade. In short it will have an objective and the translator will be charged with making sure it delivers that objective.

An in-depth understanding of the language and how that language works on every level of the target culture is vital. Perhaps the translation is for a glossy marketing brochure, outlining the qualities of a

company’s newest product offering. Maybe it’s a legal document written in a formal, specialized way, or it might even be a highly technical instruction manual for a state-of-the-art device. In all these cases the specific tone and style of the language used has to be pitched exactly right in the new language and there is no room for ambiguity or misunderstanding. The translation has to unquestionably perform its function correctly and the best way to ensure that happens is by having an experienced and qualified translator who knows the language inside out.

More than just a ‘native speaker’

And here we touch on another key point. Being a ‘native speaker’ isn’t sufficient in itself. A translator will also have substantial and relevant experience, and usually an appropriate qualification. In addition they will work on maintaining their ‘mother tongue’ on a daily basis, ensuring they stay up to date with evolving terminology and the cultural shifts that influence how language is written and spoken. ISO 17100 is the quality certification ‘…for the core processes, resources and other aspects necessary for the delivery of a quality translation service’. All language service providers seek to attain and then adhere to this quality standard.

ISO 17100 lists 6 core professional competences that a translator working for a certified language service provider should have. They are outlined here on the Institute of Translation and Interpreting website and in summary require a translator to have cultural, technical, research and domain competence as well as linguistic fluency and translation ability. Although this avoids the formal definition of any language aptitude, it does highlight the many and varied skills a translator needs to perform their job properly.

If would be an oversight to say that there are no exceptions to the rule that a translator always has to have ‘native speaker’ competency in the target language. Although few, there are a couple of instances where flexibility may be needed.

If the language required is rare it may be difficult to find a ‘native speaker’ with the right translation competence and language pairing. Of the approximately 7000 languages that exist in the world a high percentage are endangered and with them, unique heritage and cultural knowledge. Using non-native speakers in the target language could help to preserve and nurture these rare tongues, especially in the quest to create a better digital presence for them.

On the whole though, being a ‘native speaker‘ must remain a prerequisite for creating a translation that operates in the target culture in the same way as the original. The term in itself might not be the most suitable, but for now it’s one we are left with and what’s vital is the meaning behind it. A translator should have an inbuilt ‘feel’ for the language in all its forms and in all its nuance, and that, together with the experience and other skills we talked about, is the perfect recipe for a high quality, trustworthy translator who will deliver the text in the way it was meant. At t’works we guarantee our translators have all these ingredients and their translations are mixed and cooked to perfection. 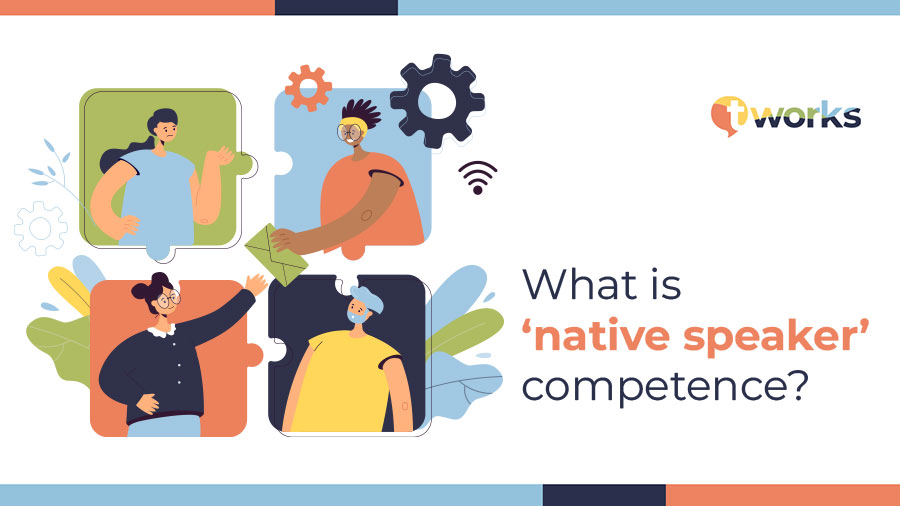