Recognizing gender bias in language and why it needs to change

As humans we arrive in the world untainted and free from bias. Although research suggests an early inclination towards positioning ourselves with people from the same social group, we don’t make judgements about other groups or adopt stereotypes until later. These (often negative) aspects of our behaviour are all learned by the superpower that is our brain. Our brain has an incredible capacity to receive and process information and it’s switched to ‘go’ from day one. It quickly absorbs the images, language and sounds around us and starts to assimilate this data into the vision of life that will become our own. In other words, we pick up bias as soon as we start to breathe.

For the most part we struggle to see our own biases. They become so engrained by years and years of repeated experiences that we soon lose sight of our objective selves – if they ever existed. Our way of seeing gender is part of this embedded subconsciousness.

Project Implicit was begun by academics at the universities of Washington, Harvard and Virginia in 1998 and aims to ‘educate the public about bias’. It has devised a series of ‘Implicit Association Tests’ that often reveal the prejudice you don’t even know you have. We took the ‘Gender-Career Test’ and were somewhat startled by the outcome, which showed in no uncertain terms our own unconscious bias. The results demonstrated that we clearly implicitly linked family with female terms and career with males terms, much against our better (conscious) judgement.

These outcomes though shocking, are unsurprising. As research conclusively shows, from the outset we are programmed by our parents and society as a whole to conform to gender stereotypes, from the moment the ultrasound scan reveals a baby’s sex, to the toys we are given, to the playground rules we observe and absorb. Our attitude to gender is just one of the unconscious biases that inhabit our brains and like others, whether ethnic or racist, ableist or ageist, it can be very harmful.

The biases we are unaware we have can influence our decision-making and cause us to treat others unfairly, often without us even realizing it. Imagine you conduct job interviews for your organization or teach in schools or – yes us too – translate from one language to another, your unconscious bias will play a part in all the decisions you make in that role and affect all the people involved in them. As we build our own truths with the information we accumulate over our lives, we search out the details which will easily fit with our own world view and build opinions that are incredibly difficult to change.

Difficult to change they might be but impossible to change they are not. It is vital that we try to find ways to address these biases as the harm done is immeasurable and can be perpetuated down through generations. Language can subtly harbor and reflect unconscious bias and so looking at what we say and how we say it is a good place to start. As linguists it goes without saying that we’re interested in the power of language and how it can be used, and in this blog we particularly want to look at the gender bias present in our language and why we should work to change it.

A spot of grammar

Grammar is never fun but in this case it can help us understand why gender is an issue in language. The way we express gender is complex. Languages themselves restrict and determine how we are able to reference a person’s gender and the constructs of grammar mean we don’t always have the words we need to represent all genders equally.

Languages fall into three categories – gendered, genderless and those which we term natural gender. In a gendered language all nouns and pronouns are assigned a gender which is usually feminine, masculine or neuter. Natural gender languages refer to the (assumed) gender of the person (he or she, him or her) but not objects, and genderless languages avoid gender altogether, referring to whether something is animate or inanimate, human or non-human and so on, rather than its gender.

The principal problems of grammatical gender are that representing gender identities other than male and female is generally difficult, and masculine structures are frequently taken as the default form of expression. Both of these mean that portraying gender fairly in our words and phrases is often challenging even when we make the conscious decision to do so and leads to the underrepresentation of women and LGBTQIA+ groups.

In addition to the confines of grammar we further entrench gender bias by favoring a male viewpoint. Historically we used ‘mankind,’ ‘man-hours,’ ‘manpower’ and so on in English to refer to things associated with all people and to add insult to injury, we automatically (in our minds) assign male gender roles to neutral nouns like ‘footballer’ or ‘surgeon’ or ‘army officer’, no matter how equality-minded we think we are. Recent research has even demonstrated that the word ‘people’ isn’t as gender neutral as you might think and often refers to contexts associated with men.

All these elements combine to make our everyday language biased towards a heteronormative and patriarchal backdrop and not representative of a gender diverse society. While we mostly perpetuate this unconsciously, becoming more aware is our responsibility.

In our recent white paper, ‘Getting to the core of gender-equitable language,’ we examine in-depth all aspects of gender in language. It’s an essential read if you want to properly understand the importance of representing gender identity through language and at the same time pick up tips on how to make your own language more gender inclusive. Download it here.

Language is the messenger

The evidence is clear, how we use language can have a direct influence on social outcomes. Research carried out by the World Bank in 2018 looked at over 4,000 languages, accounting for 99% of the global population and concluded that ‘gendered languages are consistently associated with lower female labor force participation’. In other research published in The Journal of Politics in 2019, bilingual Estonians demonstrated more egalitarian views on the roles of men and women in society when they replied in the genderless language of Estonian as opposed to replying in Russian, a gendered language.

Although these studies suggest that achieving gender equality might be easier when people speak a genderless language, what they principally show is the capacity that language has to influence and shape attitudes in society. How we say things does make a difference to the world around us.

It’s a common misconception that there’s a fixed right and wrong way to say things and that language never changes. In fact, it’s quite the opposite, language is consistently evolving and over the centuries even the way we use grammar has changed considerably. Do you use ‘thou’ much? No, neither do we. At one time however, it would have been the accepted form of address for another (singular) person and ‘you’ was reserved for those of high social standing or royalty. As this began to change there was plenty of opposition to using ‘you’ in the singular and the Quakers in particular were unhappy about the ‘ungrammatical’ use of this pronoun. Those English speakers resistant to using the singular ‘they’ because it’s ‘confusing’, should take note.

But the shift away from ‘thou’ happened anyway and most of us don’t question it now. Language has always adapted to reflect social change and it is a mirror for evolving attitudes and beliefs. What’s important to remember from the above evidence is that language is flexible and it can help change attitudes. In the context of gender in language, we know that if we want language to be more representative, it can be.

Fortunately, we are becoming more aware of the issues around not representing gender equitably in language and are making conscious efforts to redress linguistic gender bias. The now common use of the singular ‘they/them’ as an alternative to the gendered pronouns ‘she/her’ and he/him’ in English, as well as efforts to expand binary gender categories beyond male and female for documents and in forms of address, are well documented. This is happening in many languages and cultures around the world.

Making language more gender equitable can mean either adding words and endings or using more inclusive, general terms, but in all cases and to respond to the current impetus for change, effort is required. We can’t expect to be told something once and then to retain and use it afterwards without effort. And feeble excuses don’t cut it here, we need to stop causing harm through language, whether it’s unconscious or not. Like any type of training or education we undertake, learning new ways of writing and speaking – and behaving – asks for time and application. And in the workplace this is even more important to remember.

Making sure we only use inclusive language in a work environment is now expected and forward-thinking organizations continue to develop policies for its implementation. However, in a globally operating company this might not seem so straightforward. Transferring inclusive words and phrases into another language doesn’t just require linguistic knowledge, profound cultural understanding is vital. Experienced translators understand the pitfalls of language transfer between gendered, genderless and natural gender languages and have many techniques for skillfully and thoughtfully managing the conversion to another tongue. They stay alert to quickly moving thought trends in society and know to adapt translations accordingly. That’s why entrusting commercial texts and company terminology to a trained linguist is the best way to be sure your language communicates with everyone in the right way.

Recognizing gender identity and actively fostering inclusion in the workplace creates a positive and more collaborative environment. Studies show that representing identity at work makes a happier workforce and means that the organization benefits fully from the distinct perspectives and ideas that its diverse employees bring. When inclusion is a priority, staff retention rates increase and as a result productivity is improved. Nurturing a sense of belonging is a priority for successful businesses and contributes to the overall health and long-term growth of a company.

Language has a leading role in helping to achieve better equality and inclusion at work and therefore adds hugely to the wellbeing of not only the staff of a business, but the business itself. For an international company, doing this across all the languages in all its locations couldn’t be more important.

Language is a tool that as humans we all possess. It is the powerful medium by which we express and cultivate our own biases, particularly that of gender, and it reflects and reinforces both society’s prejudices and our own. But modifying the language we use also gives us the chance to have a positive effect on changing people’s ideas and assumptions. It’s an opportunity we shouldn’t squander. 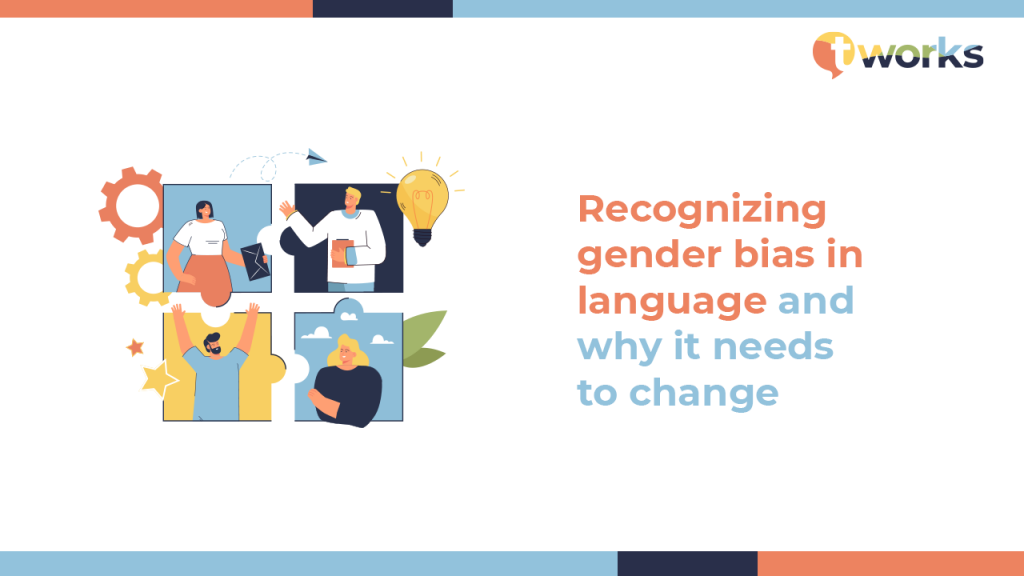 At t’works we are communication experts. We help organizations use the best language both in-house and across borders. We have teams of highly skilled translators, reviewers, content creators and cultural specialists who will make sure your company’s language speaks to everyone.