What trends and events have shaped the year in language?

‘New normal’ has been a much over-used phrase in recent times, but it’s fair to say that in some way most of us are experiencing it. As we start to leave the pandemic behind, 2022 has been the year of slowly reconnecting with our pre-Covid lives and, if we’re lucky enough, finding some stability. Meeting in person, going on holiday, planning family occasions without the fear of sudden lockdown and maybe even going into the office, albeit occasionally, have all started to reappear in our routines.

2022 began with optimism across the language industry as the encouraging signs of 2021’s ‘new normal’ were consolidated. Adapting to the new hybrid working conditions with a focus on the wellbeing of workers as well as building on the positive economic rebound from the previous year, gave industry leaders plenty to be confident about. The rapid digital adoption that followed the Covid-19 outbreak meant Language Service Providers (LSPs) were increasingly well equipped to navigate seamless remote working and the heightened demand for all types of digital content across the globe.

But of course, 2022 had unpleasant surprises in store and Russia’s invasion of Ukraine and the subsequent conflict has touched all our lives whether directly or indirectly. t’works suspended new business and sales operations in Russia within a month of the beginning of the war and offered Ukrainian refugees to Germany cost price document translation. Other LSPs announced similar initiatives and language professionals widely volunteered their expertise. As an industry used to working across borders with colleagues of many varied nationalities, the war in Ukraine has been acutely felt.

The conflict has also shown us once again the power that language holds. The Russian and Ukrainian languages became part of the political battlefield and the desire for information about Ukrainian was a focal point for internet searches in March this year. Much was written about the differences and similarities between the two languages and the cultural history of Ukrainian. Language learning websites reported a major interest in the East Slavic language as people looked for ways to show their solidarity with the people of the assailed country of Ukraine. Imperialist notions were put into sharp focus as we started to better understand why using the definite article before Ukraine and anglicized spellings of Kyiv were unhelpful ways of speaking about a country defending its independence and even its very existence. As the war in Ukraine thrust language into the limelight, we saw very clearly that what we say and how we say it represents far more than just simple communication and that to an extent, language helps us make sense of the world around us.

The interest in Ukrainian has continued throughout the year and has recently reached the world of technology as the German machine translation leader DeepL, announced it had added ‘this year’s most requested language’ to its online platform.

Language and technology are never far from each other’s radar and 2022 has once again witnessed significant advances in the world of language-related artificial intelligence (AI) and software. While the media buzz has been centered around AI that can generate images from text commands, it is artificial intelligence capable of creating human-sounding language that occupies the thoughts of our industry. Will machines soon be so imaginative and clever that the next Shakespeare could be among them? Will they start winning the Booker Prize? And more to the point, will they replace human translators and copywriters?

AI systems called ‘large language models’ continue to dominate the technology headlines. These platforms powered by enormous amounts of data scraped from the internet are the focus of big-time funding and Big Tech companies – Microsoft, Meta and Google in particular. These text generating monsters have the potential to offer value to a huge range of businesses by facilitating amongst other things, marketing and customer service communication, and as such, attract an awful lot of attention. But while these machines may sound human, the evidence is that for the moment, at least, they can’t match human creativity and common sense. Large language models have a tendency to invent facts and often demonstrate worrying bias. Measuring their effectiveness is equally difficult and the results can be misleading.

2022 has shown us that although these AI models are getting better at replicating human language, they aren’t necessarily more trustworthy.

Artificial intelligence and the translation question

It’s important to understand that artificial intelligence can’t ‘think’ for itself. Although it can express itself in a humanlike way, it doesn’t have real world experience or the ability to make decisions based on that experience. It simply learns which words and phrases usually go together and what topics they are associated with. It doesn’t understand human logic or the reasoning behind language and despite the bruhaha caused by claims to contrary, it isn’t ‘sentient’ yet.

Which is why AI-powered machine translation also still has a long way to go. Although it can produce some dazzling results and it’s hard not to be impressed when it helps us communicate with people with whom we don’t share a language, the reality is that it can still get it wrong in many instances. If anything (as argued in this article from the experts at CSA Research), human linguists are becoming more valuable in the language workflow as their role of ‘human-in-the-loop’ is increasingly fine-tuned. Enhanced technology in the form of terminology management and translation memory, as well as the selective use of machine translation, can all be used by linguists and project managers to increase productivity and therefore value to the customer. Human expertise, however, must remain as the foundation on which these technologies can function.

Of course, the rapid technological changes we are experiencing also require the adaptation of working environments and the language industry faces some challenges in adopting them effectively. But for a sector accustomed to being at the forefront of disruption and innovation throughout its history, the ability to transform comes naturally.

Improving digital access to Indigenous languages 2022 began the Decade of Indigenous Languages and the continuing campaign by UNESCO to protect threatened Indigenous languages and preserve the invaluable knowledge systems and culture they embody. It is being increasingly recognized that these languages hold vital information for environmental sustainability and that if they die, ancient ways of preserving and living in harmony with our habitats will be lost.

Here too, technology is playing a significant part. Advances in AI and machine learning are now being leveraged to bring underrepresented languages into the digital world and help make connections between them and a global community more achievable. One of the most talked about examples is the revival of the Indigenous language Te Rao Māori spoken by the Māori people of New Zealand. Once in danger of extinction, a language archive has been diligently created over the last 30 years and an open-source app is now used to collect oral recordings. In a widely publicized move this year, sovereignty over the data collected was protected from the hands of the big technology companies in an effort to keep the language’s destiny in the hands of future Māori generations.

Like Te Rao Māori, activists for Indigenous languages around the globe are using digital methods to revitalize their languages. From augmented reality on Vancouver Island in Canada for immersion in the Kwak’wala language to using edtech in Nigeria to bring Yòrúba into digital spaces, projects worldwide are rapidly gaining impetus.

Whilst it’s easy to find flaws in the widely available online machine translation platforms, there are growing benefits for underrepresented languages as technological advances enable their addition to the well-known engines. In May this year Google announced the addition of 24 new languages to its Translate platform. These included 10 African languages – of which Lingala is spoken by approximately 45 million people in Central Africa – and the for the first time, three Indigenous languages of South America – Quechua, Guarani and Aymara. Meta is also turning its attention to including more languages online with its ‘No Language Left Behind’ project. In 2022 it added 55 African languages, many of which are low-resource, as well as introducing the desktop version of Facebook in Inuktitut, one of the most widely spoken Inuit languages.

Are you still playing Wordle?

Remember at the beginning of the year when the Wordle craze took hold? And then spawned thousands of different versions in different languages? Seems a long time ago now doesn’t it. Many of us, however, have refused to kick the habit of our daily lexical quiz and haven’t been put off by claims from some quarters that it got more difficult following its sale to The New York Times. The game of Wordle has even inspired the choice of the ‘Word of the Year’ at the Cambridge Dictionary. The 5-letter word ‘Homer’ – an informal expression in US English for a home run in the sport of baseball – sparked a heated, Wordle-linked debate in May when many people on the British side of the Atlantic failed to find it as their Wordle solution. Needless to say, it was the basis of frenzied online search activity, particularly on the 5th of that month, the day it entered the Wordle universe.

Other recently announced words of the year have been noticeably different, although united in their reflection of the disorientation we’re feeling in present times. The Oxford Dictionary conducted an online poll and its voters chose ‘goblin mode’ as the most important expression of 2022, Collins opted for ‘Permacrisis’ and Merriam Webster, ‘Gaslighting’.

That we reflect on the year behind us by assigning words is certainly revealing. It’s yet another example of how we use language to gain an understanding of what’s going on in the world and how we feel about it. Language is at the heart of our existence and as perhaps our greatest invention, it is an intrinsic element of our very humanity. 2022 has shown us more than ever that language matters. 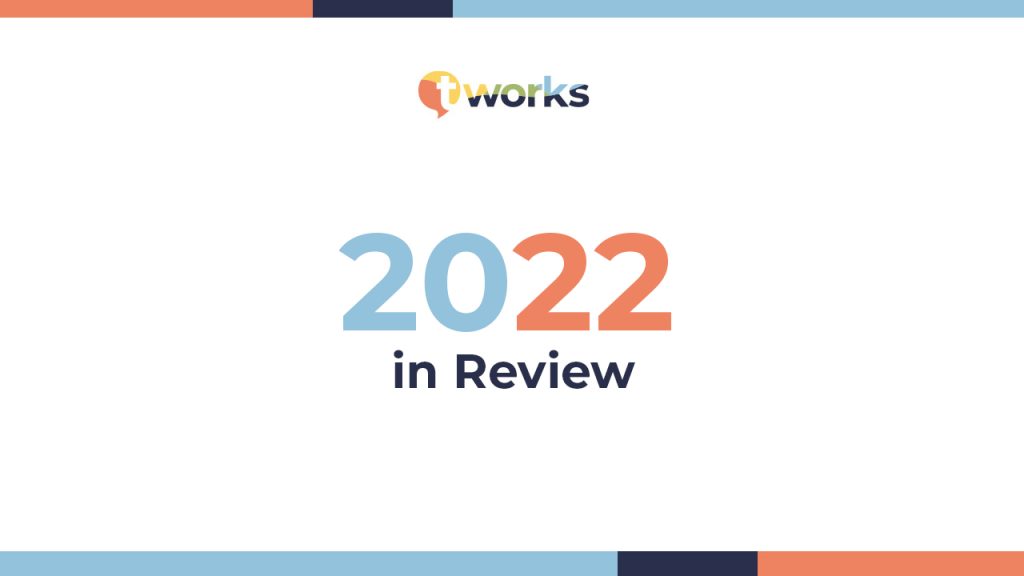